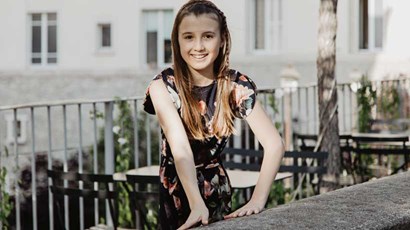 When is a book more than a book?

The annual Write a Book in a Day competition took on new meaning for a group of students when they realised they were fundraising for one of their own.

Sienna Newton is a lot of things. She’s a beloved daughter, the awesome sister of Ebony, respected captain of her school, a writer of creative fiction, keeper of a personal journal, a brain cancer survivor and an author. And she’s only 12 years old.

When Sienna was selected to take part in the Write a Book in a Day competition at her school, St John the Baptist Primary School in Maitland, NSW, it was based purely on her talent as a writer. She was part of a team of ten students, chosen from the ranks of the gifted and enrichment program, with the ability and attitude to cope with the rigours of 12 hours of creative writing.

At first, the pupils knew little of where all the sponsorship money they were generating as part of the competition would go. But during the planning process it was revealed that funds raised would go towards the support of scientific research into treatments for kids with cancer. Sienna was not long out of a gruelling series of therapies after being diagnosed with a rare brain cancer at the age of eight.

“All of the kids loved the fact that we were going into the project, simply because of the creative nature of the challenge,” says Jenny McFadyen, teacher/librarian and Gifted Enrichment Mentor at the school.

“But when we discovered the money raised would directly fund the research being done by some of the doctors who saved Sienna’s life, it took on an entirely new meaning.”

The book written by the team, Sienna says, is called Lost But Found. It’s a thrilling tale about a house painter and a race car driver who meet in hospital and are mysteriously transported into a painting in their ward, into a dungeon where they must rescue a trapped monkey.

“At the beginning we wrote our individual jobs on a white board,” Sienna explains. “There were writers, technology people, and front and back cover illustrators.”

“Most of the day was fun. But in the last hour we couldn’t get our heads around the app we were using. It was called Publisher and it was printing all the pages backwards. But we finally figured it out.”

Published Write a Book in a Day entries are sent to children’s hospitals around Australia. The Book Rookies not only wrote a cracking yarn but also a heartfelt and encouraging dedication.

A dinner delivery of pizzas to the exhausted creative team helped boost their flagging energy and at 8pm, having begun their day 12 hours earlier, the job was finally done.

The children were thrilled with the outcome, and even more exciting was the fact that they had just funded vital research that would ease the burden of cancer treatments for kids.

“There are so many impossible decisions you’re forced to make when your child is diagnosed with cancer,” says Kylie, Sienna’s mum. “The first is to agree to a treatment that could save your child’s life but that will also potentially give them a disability.”

“Then there are the ongoing challenges. Sienna suffers medical trauma anxiety because, by the time she was ten, she had seen everything there is to see. She lost several friends who she met in hospital, and she thought she was going to die too.”

There have to be better options than killing brain cells and potentially creating other disabilities, Kylie believes. Research being funded by The Kids’ Cancer Project, organisers of Write a Book in a Day, is helping develop these new, kinder therapies.

“Sienna is amazed that the money she helped raise is supporting work being done by doctors she knows,” Kylie says.

Sienna copes with the memories of her medical experience by reading and writing. Her favourite book is The Darkest Minds, about a contagious disease that kills most of the world’s children. Those who survive have unusual abilities, such as telepathic powers.

She also regularly writes in a journal. “I write stories sometimes,” she says. “We write stories at school, but I also write in my own time, so I can express myself.”

“I like to write down all of my thoughts. I don’t give them to anybody to read, I just keep them to myself. I’m just writing my own story.”

Jenny, Sienna’s teacher, says the writing project was dear to the entire group’s heart once they realised Sienna’s personal connection to the work they were funding.

“It began as an activity that was going to give the children the opportunity to extend their learning in a fun, challenging, creative way, but then it became so much more.”

At the same time, the project itself was an enormous success in terms of its learning outcomes.

“The children worked collaboratively and communicated exceptionally well,” Jenny says. “The creative thinking that was going on was just fabulous. This was a group of 11 and 12-year-olds and they were handling the sort of pressure that a lot of adults wouldn’t have coped with. They were superb!”

Discover how you can write a book in a day! Learn more or register a team now.